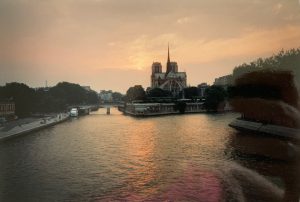 26 years ago, on Good Friday, I attended a church service at the Notre Dame Cathedral. I was 22 years old, living in Paris and enjoying every single minute of it. I loved every aspect of life in Paris: the culture, the food, the people, the architecture, the art, the mentality, the wine, the elegance, the beauty, le grandeur! Walking in the streets for hours and hours, the museums, the buildings, the smell, the streets and even the dirty old subway. It was all magical to me and the city never stopped being magical. It is, together with my hometown Leiden, my favourite city in the world.

Any news coming from Paris has my instant attention; my husband and children are used to it. My heart lies in this beautiful city. Wonderful people I know live there. Seeing the Notre-Dame in flames had me in tears. So many memories flashed by: walking past it from all different angles, many times, having picnics au bord de la Seineclose by and eventually: attending an actual service, which was one of my greatest wishes at the time. (Another wish was biking on the Champs Elysees, which almost turned into a suicide mission, since I forgot that I had to bike the roundabout of Place Charles de Gaulle as well! Tres dangereux you know.) I went together with a Dutch friend, whose father was a pastor. Two protestant girls in a cold, cold cathedral for three (!) hours on a very uncomfortable chair, but boy was it magical! I remember feeling like I was the centre of the universe. I was experiencing Great Things. To me, it was not so much the building itself, but everything around it. I felt really really cool: living abroad, feeling important and all (that ‘on top of the world’ feeling in your late teens, early twenties), living like as if I were a true Parisienne. “Hm? Ah, just going to my church, you know. Where I live.”

It was also one of those times when unexpected, magic things happen in life: we were sat just next to the location where all the priests entered (was it from below, the catacombs? I vaguely remember, but I could be wrong), in silence, with candles – bringing in the light – and all of a sudden, I saw a classmate amongst the priests! A Polish guy who was in my French class, whom I didn’t know very well and had qualified as ‘uninteresting’ (youth can be cruel). And he was one of the priests at this super important ceremony, in this architectural monument of a cathedral! I think it was at that time that I changed my view on people and judging people. You never, ever truly know a person (and, consequently, can judge a person, if at all) unless you get to know him or her a little bit better. 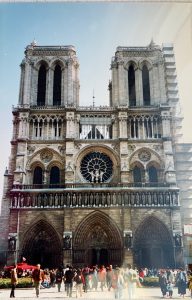 The French will build up the Notre Dame Cathedral again and most likely make it even prettier. If there is something French people love it is beauty. This was a very, very sad moment the French experienced together. And together with them many people around the world, who have some sort of memory of or connection with the Cathedral and the city of Paris.

p.s. the images in this story are pictures of actual photographs I took at the time. Just went through my shoe box of Paris memories, which is actually on my bedside table, not hidden away in some cupboard. You probably have an idea of my state of mind right now 😉 #nostalgia